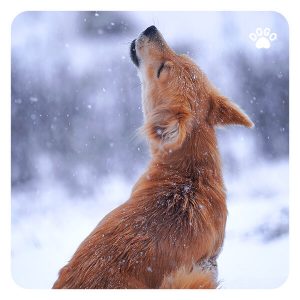 We’ve all heard it, and it doesn’t matter where you live; the unmistakable sound of a dog howling in the distance. A dog’s howl, similar to a wolf’s, is a loud, drawn-out, mournful cry. But, have you ever noticed your dog howling and either thought it was pretty amusing or possibly even concerning not to know the reason why? So, why do dogs howl?

Domesticated dogs diverged genetically from wolves 40,000 years ago, and they acquired some wolf behaviors, and howling is one of them. Wolves use howling to identify themselves to other wolves, announce their location to other family members, ward off intruders, warn other wild animals to stay away from their territory, and bond with other pack members. Dog howling is a form of communication, an innate behavior, and can be seen in all canine species. Still, some breeds are known to howl more than others. Breeds known for howling include Alaskan Malamutes, American Eskimo Dogs, Beagles, Coonhounds, Dachshunds, Foxhounds, Hounds, Huskies, Native American Indian Dogs, Tamaskan Dogs, other traditional hunting dogs, and among others.

As dogs have evolved, their reasons for howling may have also evolved, but there are several reasons they do. Here are some of the most common reasons for it.

Suppose your neighbors notice or complain your dog is howling while you are at work and away from home. In that case, your dog’s excessive howling may be caused by separation anxiety. Symptoms and signs of separation anxiety in dogs include urinating, defecating, barking, chewing, digging, destructive behaviors, escaping, pacing, panting, depression, or howling. It is from the distress of physically being away from their parents.

Similar to separation anxiety howling, some dogs howl because they feel lonely and stressed, especially if they’re alone or kept outside for many hours at a time. Dogs, like humans, are social animals, and they need frequent interaction. If this is the case with your dog, you may need to spend more time with them. Invest in some quality time and engage in fun activities that will help you and your dog strengthen your friendship and bond together.

Dogs sometimes howl when they’re hurt or sick. If your dog starts howling more than usual, they vocalize that they are in pain. Bring your dog to your local veterinarian to rule out any medical illness or injury. Canine cognitive dysfunction, sometimes called dog dementia, is a medical issue that affects a dog’s brain and can also cause a dog to howl. Some senior dogs with this medical issue will howl because they are disoriented, confused, or scared. 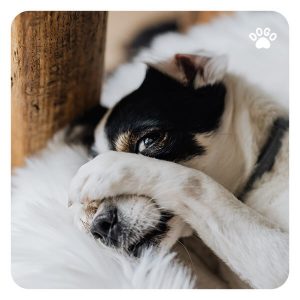 Just like a dog who is howling out of a confused state of fear due to canine cognitive dysfunction, dogs who are in other fearful situations may howl. Scared puppies that are extremely scared will let out a howl which indicates they are terrified of a situation. However, it is unlikely that a happy, excited, confident, and relaxed dog will howl.

Some dogs howl, whine, or bark to seek attention. Some dogs pick up on the fact that they can get your attention by howling. They may be howling to alert you that they sense danger around, or it could just be to get you to fill their bowls with some more food and water. Either way, howling is a form of communication. Although it may be cute, humorous, and entertaining to see and hear your dog howl at first, it can quickly become bothersome to some of your neighbours! You will need to start ignoring your dog’s attention-seeking howl and train them to redirect their energy. Capture those moments when your dog is being well-behaved, quiet, and not reacting to the outside sounds or triggers by rewarding them with a special toy, treat, or praise. For example, you can teach your dog to make a sound or bark on cue when you give a verbal cue “Speak!” and then to quiet down when you give a verbal cue “Quiet!”

Many dogs howl when stimulated by certain high-pitched sounds. The triggers can be anything from a siren from the firehouse, music on a stereo at a party, music on television, the sound of musical instruments, or in response to another dog’s vocalization. When they hear the sound, they will howl to acknowledge the sound and express their desire to join in or give signs that they are alert and responsive. Even people who enjoy dogs howling seem to encourage their dogs to howl by howling themselves!

When a dog feels excited, they will howl to show off and seek praise. A hunting dog, for instance, will howl when they have detected a game or succeeded in their hunt. Howling is a way to vocalize their communication that they are feeling a sense of excitement! 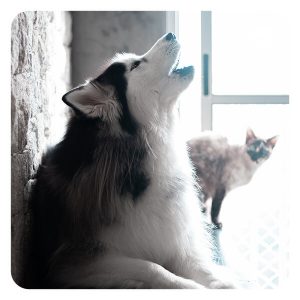 Whether you find it comical that your dog can sing along with you on Karaoke night at your house or if you find it to be an alarming sign that your dog is excessively barking, it is always best to figure out the root of why your dog is howling. Avoid punishing your dog for howling behaviours because it can be a crucial sign of pain and stress; punishment will not help alleviate or solve the problem. Lastly, training your dog to howl, bark, and be quiet on verbal cues will help manage their vocalizations.