Dog Sniffing Each Other. What Does It Mean?

Dog Sniffing Each Other. What Does It Mean? 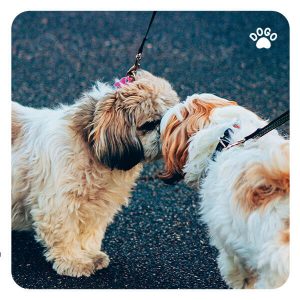 As soon as dogs are off-leash and free and play together, they begin to sniff each other. Some do it quickly, others really take their time, and the dog parents are discouraged by this spectacle far from human propriety! Sometimes, after having sniffed the buttocks of another dog, a play bow follows. Other times, the dog continues and moves to the next dog to sniff them. More rarely, aggressive behaviour ensues to ask for more space. So what is it about this olfactory parade? What information do dogs get by sniffing each other? Why is it so important?

A World of Scents

Dogs live in a world of scents, and olfaction is their most developed sense. They have up to 300 million cells dedicated to interpreting smells, unlike about 6 million humans. It is how they discover the world, their environment, humans, other animals and dogs. Some breeds have a much better sense of smell than others, but for all dogs, exploring places with their mouth is very important for their well-being. 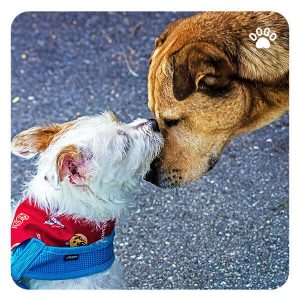 When they meet a canine friend, one of the first steps is to smell their butt to find out who they are and their intentions. It’s a bit like visiting the Facebook or LinkedIn page of someone we don’t know very well. You find lots of relevant information there, which gives us a good idea about the person’s personality and hobbies. When they meet, thanks to the same glands, dogs can know who they are dealing with by sniffing under the tail. Moreover, a dog holding their tail high would release odours informing that they do not want to play and that it would be better to leave them alone. On the other hand, a dog with a lower and more relaxed tail would not send the same hormonal signals.

What Do They Get Out of It?

During this encounter, dogs obtain information such as the other dog’s age, sex, health and mood. Smelling each other also relaxes the atmosphere, so it’s important not to rush them and let them finish this olfactory parade. By the way, while it’s not recommended to let dogs sniff when on a leash, if you do, keep the leash slack so you don’t rush introductions. Tension on the leash could increase the stress and scramble the information perceived by the dogs during this meeting.

Another important information that they can pick up through smells and hormones is whether the female present is in heat or not. This smell is so strong that a male can smell it several meters away. 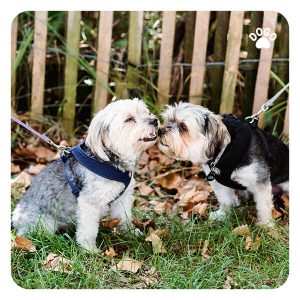 In conclusion, sniffing odours is an integral part of the life of dogs, and it is essential to let them explore this invisible world at their leisure. By leaving olfactory traces during walks, dogs give information about their identities which are interpreted by all the other dogs that pass on this road! The introductions are later formalized during a face-to-face meeting. Letting dogs sniff allows them to communicate with each other. Who are we to stop them?