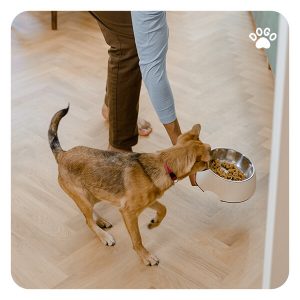 Tasty treats are the most common way to motivate. They are perfect for learning obedience because you can deliver them fast. The treats should be no larger than one bite so you can keep on training without pause. To get started try out different pieces of food: cooked meat, cheese, doggy snacks, etc.

However, remember not to show your dog the reward before or during giving the command, but only after the exercise. If we show the reward to the dog, then they will learn that it is only worth following the commands if we have the reward with us. Showing the food before giving a verbal cue is only allowed at the initial stage of training.

Depending on the difficulty of the task, it is worth having treats of a different value from dry kibble to super tasty ham. After all, the more difficult task, the better treat!

2. Rewarding with Fun Together

If your dog is not a binge eater, you can’t always get them to perform for treats. Try to reward them with a little fun instead. This way is slightly more difficult. It also extends the time of training, because initially after every well-done task we have to spend some time playing.

3. Rewarding with Their Favourite Toy

A toy as a reward is very often used in agility to speed up tasks (ball throw) and in defense where playing tug with the dog is the best motivation for dogs practicing this sport. When rewarding with a toy, it is necessary that the dog knows how to give it back on command. You will find the command in the Dogo App.

4. Other Forms of Motivation

You don’t always have to reward your dog with treats. This is only where training begins but behaviours that have already been learned with treats should be rewarded in another way as soon as possible.

For some dogs, a great reward will be their human’s joy. Sometimes it is enough to praise or offer petting. At later stages of training, you should randomize the rewards so that your dog does not learn that they will always get the reward for every command they perform.

There is another form of reward that can be used on a daily basis – “situational rewards”. When our dog is impatiently waiting for a bowl of food, try asking them to perform a trick before giving them the meal. In this case, the reward will be their food. When the dog can’t wait to be released from the leash during the walk, try to ask them for ”Heel” cue. The chance to run free will be a great reward, and as we know, things you worked for, bring more joy.

There are plenty of possibilities to motivate your dog for training. You just need to realize what your pet likes the most, and then there will be certainly no problem with motivation. Dogs are used to working with humans so it’s usually fun for them to solve tasks and learn new things. The key to success is an individual approach. Every dog is different and will be motivated by something else. Take time to get to know your dog and enjoy training together.