How to Get Your Dog Used to Other Dogs

How to Get Your Dog Used to Other Dogs

Every dog owner has probably heard more than once how important socialization is. Socialization in dogs takes place between the 4th and 12th weeks of life when a puppy learns what ‘being a dog’ really means.  At this stage, the puppy usually makes contact with his siblings and learns the rules of the dog’s pack. This is when they should develop basic communication skills. Between 8 and 11 weeks, they learn the feeling of fear, so if your dog experiences severe stress or pain during this period, they may become overly anxious in the future. Everything we show the puppy at this age will be considered by them as a regular part of their world. However, anything we won’t show them may cause them anxiety in the future. So how to get your dog used to other dogs easily? 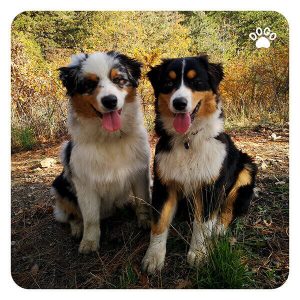 A puppy’s best teacher will always be their mother. She teaches the rules of the herd, preparing them for further life. There are various individuals in the litter, very shy, but also feisty, ready to tease the rest of the siblings. The dog’s mother observes puppies’ behaviour and reacts when one of them is too pushy. This is an important lesson – without it, the puppy would think in the future that everything is allowed.

Socialization by the owner

In their new home, the puppy should develop further their ability to communicate with other dogs. If this is not available, the young dog will forget how to do it and won’t be able to improve their social skills. If after some time, they meet an unfamiliar dog, they will usually feel insecure. They might be very curious about the other dog at the same time. Such contradictory emotions usually lead to hyperactive behaviour. It can provoke resistance in the other dog and make them want to discipline the youngster. This, on the other hand, makes the puppy believe that they should be afraid of other dogs. Additionally, it might lead to aggression and aversion towards them. After similar events, owners often isolate the puppy from other dogs to ensure their safety. Natural subordination signals, such as lying on the ground, lying on their back or showing stomachs, are interpreted as signs of extreme fear. Nervous intervention by the dog’s owner is a signal to the puppy that an unknown dog is indeed dangerous.

There are situations when a puppy’s early socialization process is disturbed.  For example, a puppy is taken away from their mother too early or a puppy doesn’t get to know their mother and they spend their childhood in a shelter. In this case, the process of introducing the puppy to other dogs lies with their human friend. This education is very important. It affects both the owner’s comfort and the dog’s behaviour and well-being on walks.

Getting a dog used to another dog 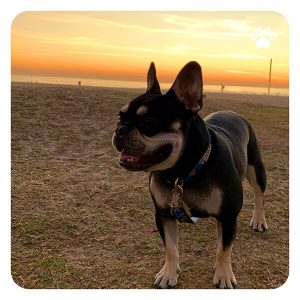 If we want to acquaint our dog with another dog, there is a basic rule for that – the meeting should take place on neutral ground. Dogs are territorial animals. We can’t expect them to immediately like an unfamiliar dog in their own house. To get two dogs to meet each other for the first time, choose a place where dogs will be able to redirect their energy to sniffing – a place with trees, grass, or meadow.

When we know that our dog doesn’t make canine friends easily, it is worth choosing the right companion for the beginning. Try to set up a meeting with a calm dog that can communicate well. Thanks to this, our pup will get to know a foreign dog in a pleasant and safe way.

One of the best ways to socialize your dog with other dogs is to take walks in parallel. Thanks to this form of introduction our pet gradually gets used to the presence of a foreign dog. During the walk, your dog gathers a lot of information by smelling and observing the other individual.

On a parallel walk, two people walk next to each other, keeping the dogs on a leash. The distance between the dogs is an individual matter, and the determinant is the dog that is being socialized. If they cannot look away from the other dog, they are tense, it means that the distance should be increased. The dog should be able to walk freely, explore the area, and read information about the other dog. If after a few minutes the emotions are dropping, dogs behave freely, they check for smells, you can switch places. Let your dog lead once, and in a moment let them follow the other one. The walk should last several minutes.

When you notice that both dogs feel comfortable, you can let them approach each other, but only for a second to sniff around, then walk away again. However, if there is still tension as the contact decreases, you shouldn’t come any closer. Repeat these walks and gradually reduce the distance between your dog and their companion. Keep an eye on your dog and their behaviour to avoid unwanted events. 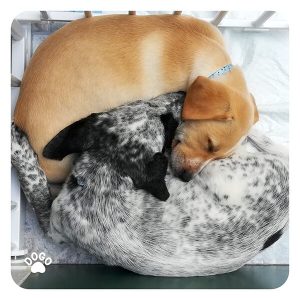 To get your dog used to other dogs, remember not to put unnecessary pressure on your puppy or adult dog. Like humans, not all dogs have to be sociable and not all dogs will want to make a lot of social interactions. Some dogs prefer to keep a small circle of people and pets around them. This is perfectly normal.

At the same time, make sure you give your puppy enough of social stimulus in various circumstances so that they will bravely face their bright future.