Dog Aggressive Towards Other Animals

Dog Aggressive Towards Other Animals 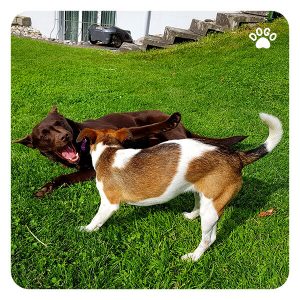 Your furry friend doesn’t accept other animals? Is your dog aggressive towards other animals? Do they show their teeth or get angry? These situations are very uncomfortable and dangerous for you, your pet, and the other animal. It is time to change it!

Aggression towards other animals can be a manifestation of…?

Primitive and wild dogs had what is called a “hunting instinct”. In the past, no one gave them wholesome food in a beautiful bowl. They had to find their food on their own, and this is what their instinct was for. And what exactly is this instinct? It is a pattern of behaviors that enabled a dog to hunt prey, including:

Currently, dogs are pets and most of them don’t actually need these skills. However, that doesn’t mean they don’t have them. The instinct has partially remained. When dogs were crossbred, and new breeds were created, their hunting behavior was also modified. Initially, dogs were meant to serve people for work. Therefore, only selected elements of the hunting behavior were strengthened. Of course, those that were considered valuable. The dogs that didn’t exhibit the desired behaviors were not selected for breeding and therefore their character traits were not passed to further generations. For example, Pointers were assisting humans when hunting. Pointers’ skills were valuable at tracking and directing humans to the prey. It was expected that the dog shows the animal rather than attacks and eats it themselves. That is why the following elements were reinforced: tracking, observation, sneaking, and catching. The following were extinguished: chasing, biting, tearing, and eating.

Therefore, nowadays, Pointers may tend to: staring at other animals, sneaking upon them, and biting their body parts (such as paws). Aggressive behavior is directed most often on small animals, especially rodents, those that move quickly and make high-pitched noises (e.g. screeching). 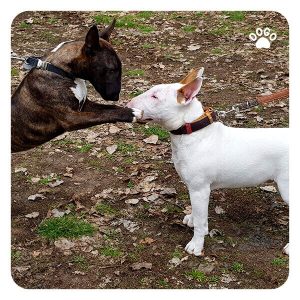 This type of aggression is most common in dogs that are young and just developing their self-esteem. During adolescence, dogs become independent. They often show their strength to the limit. It is the time when there is also a storm of hormones. Dogs may then show very possessive and territorial behavior towards other dogs and animals. In these situations, they usually decide to defend their territory or protect a chosen resource. The resource can be anything that is within reach of your pet.

Attempts to dominate do not only happen in young pets. These behaviors can occur in a dog of any age. It mainly occurs when a dog struggles with low self-esteem. Through aggression, they put a mask on to appear as a threatening, angry dog. They ward off potential danger, and this is the way they cope with the problem.

Negative memories bring up destructive emotions. It might be another reason why your dog is aggressive towards other animals. Bad past experiences can be so strong that they can completely modify a dog’s behavior. They often make the dog withdrew and become fearful. A frightened dog is most likely to either flee or attack. This is normal! What will you do if you are threatened? You will start to defend yourself, right? For a dog, the best defense is to attack, especially if their movements and space are limited, e.g., by a too-short leash, a small room, etc. Then the dog gets the impression that there is no way to escape. So they decide on the last resort – attack!

4. Poor or Lack of Socialisation 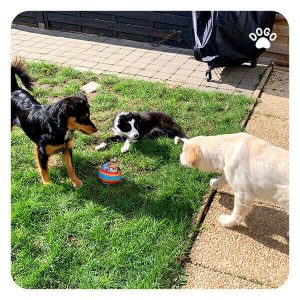 Suppose the socialization in the early stages of a dog’s development has been successful. In that case, there is less risk of aggressive behavior toward other animals.

If socialization has not taken place, the dog does not know what to expect from other animals. They are not prepared for a potential encounter with them. Therefore they have no idea how to deal with them. The dog may react inadequately to the situation, such as in self-defense, due to fear. The general rule of proper socialization is to prepare the dog for various stimuli and situations that may cause stress. Getting to know these stimuli is based on boosting the dog’s self-esteem. If the self-esteem is high, the dog will be better able to cope with tension.

If socialization is not done correctly, there is a risk of aggression. Socialization may be insufficient or too intense. What happens when you over-socialize? Instead of familiarizing the dog with various stimuli, you can overwhelm them. Then you will get quite the opposite effect from the one intended.

If you struggle with your dog’s aggressive behavior towards other animals, we recommend consulting with your local dog trainer or behaviorist.