“He’s wagging his tail; that means he’s happy.” How often do you come across this statement? It shows how few people can actually read their dog’s communication correctly. There are as many dogs as different tails; that’s why messages sent by dogs must be read, taking into account their breed and natural body structure. Over the years of evolution, many different breeds have been created, and some have straight tails, others curled to the back. In addition, some dogs carry their tails relatively high, while others prefer to carry their tails low. So without knowing the differences between dog breeds, it’s easy to make mistakes in reading their signals.

A dog’s tail position can express a whole range of emotions. The tail’s wagging can indicate joy, but it can also express anxiety, fear, confidence, or announce an attack. Scientists have shown that dogs do not wag their tails when they are alone in a room, no matter what emotions they are feeling at the moment. By moving their tails, dogs want to communicate a particular message to the viewer.

In general, we can say that a high raised tail indicates confidence. The more intensely a pooch wags their tail high, the more excited and ready for action they are. The high tail position also helps spread scents from the perianal glands, essential for canine communication.

A stiff, high raised tail or one when the dog makes small, short, and quick movements is a warning of an attack.

Tail in a Neutral Position

The neutral dog’s tail position is when the tail is at the level of the back. It indicates that the dog is calm and relaxed. Free and sweeping movements of the tail indicate happiness. It is this wagging that signifies a dog’s joy. When a dog is happy, their whole body often waggles together with their tail. It can be seen, for example, when greeting the owner. The body is then relaxed.

If the dog’s tail is in a neutral position, but it is stiff, and their movements are slow, the dog is alert and a little uncertain. This message may be sent when your dog has heard, seen, or smelled something that makes them anxious or curious. 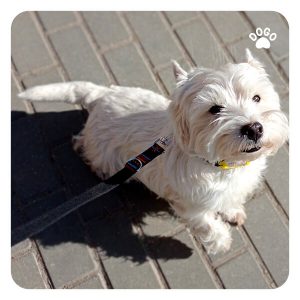 A low wagging tail indicates that your dog is scared. A slightly lowered tail position combined with a light sideways wagging may indicate a submissive dog. A low wagging tail usually means that the dog is not confident, anxious, or scared. Often, very frightened dogs tuck their tail under themselves and press them between their hind legs to avoid spreading the scent, which communicates that the dog is stressed. Waving the tail so low doesn’t mean that dog is happy to see us and wants us to pet them. An attempt to pet the dog, especially by a stranger, may result in an attack if the dog does not trust the person.

Scientists have shown that positive stimuli that a dog looks forward to, such as seeing their parent, activate the brain’s left hemisphere and cause the tail to wag more to the right. Negative stimuli that the dog wants to avoid, such as the appearance of a threatening stranger, activate the right hemisphere of the brain and make them wag the tail more to the left. Other dogs can read this asymmetry perfectly.

Some dogs have had their tails deliberately clipped to make them look more threatening, making them much more challenging to communicate with. When reading the signals sent by a dog with a cropped tail, it is a good idea to look at the base of the tail. Even with a short tail, you can see if the dog is lifting it slightly or trying to push it under.

Since 2012, clipping dogs’ tails or cropping their ears is illegal in Poland and is classified as animal abuse. However, unfortunately in other countries, this custom is still being repeated, which to some extent impairs a dog’s communication.

In reading the tail wagging messages, the tail’s position, the speed of wagging, and the direction of these movements are essential. You should not overlook the posture of your dog’s whole body and the messages sent out by their mouth, ears, eyes. Your dog’s behavior should always be read as a whole. Focusing only on the tail does not give you all the information.